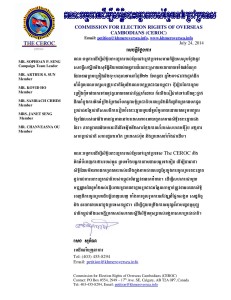 Commission for Election Rights of Overseas Cambodians (The CEROC) is honored to express hope and optimistic towards the seven mechanisms to breakthrough the political deadlock that was agreed and signed on July 22, 2014 by the top leaders of the CNRP and the CPP. Although the agreement has not yet been yielded, we have put trust on the political wills of the leaders to put effort to bring about democracy and rule of law for Cambodian people especially the national election that is universal suffrage by allowing Khmers overseas to be able to vote. This pragmatism is paralleled to the various statements by the European Union, the United Nations, USA, Japan and France etc. 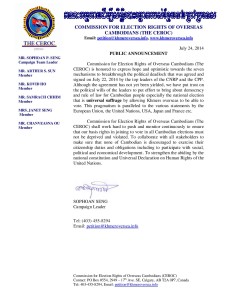 Commission for Election Rights of Overseas Cambodians (The CEROC) shall work hard to push and monitor continuously to ensure that our basis rights in joining to vote in all Cambodian elections must not be deprived and violated. To collaborate with all stakeholders to make sure that none of Cambodian is discouraged to exercise their citizenship duties and obligations including to participate with social, political and economical development. To strengthen the abiding by the national constitution and Universal Declaration on Human Rights of the United Nations.

Press Release Regarding the Breaking Through of Political Deadlock in Khmer

Press Release Regarding the Breaking Through of Political Deadlock in English

The original political deadlock breaking in Khmer and English