On the 16th anniversary of its adoption, observers reopen a debate on the founding document’s legacy 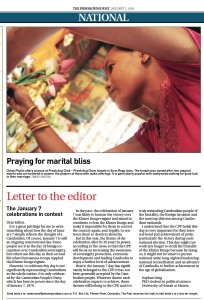 KEY PROVISIONS IN THE 1993 CAMBODIAN CONSTITUTION:

AS the Kingdom marks the 16th birthday of its Constitution, adopted with much fanfare on this day in 1993, observers remain divided on the elusive document, opening a debate on whether it stands as a symbol of Cambodia’s emergence from years of war and conflict or a sign of squandered opportunities.

The Constitution that came into force on September 24, 1993, was a watershed in Cambodian history, containing a separation of powers (Article 51), adherence to international human rights treaties (Article 31) and a series of provisions respecting basic civil rights (Articles 32 to 50).

Coming at the tail end of the United Nations Transitional Authority in Cambodia (UNTAC) and just four months after Cambodia’s first multi-party elections in decades, the Constitution arrived at an important crossroads in the country’s history. But some say the story of the document since 1993 has largely been one of form over substance.

“We have a sophisticated set of documents, but documents are only papers. The facade is there, but there is no democratic substance,” opposition leader Sam Rainsy told the Post.

Sam Rainsy, who was part of the royalist Funcinpec party at the time the Constitution was drafted, said many provisions have simply been ignored by the government since 1993, and the spirit of the document has been “killed” by subsequent laws that restrict its scope and override its provisions.

The Constitutional Council, the body charged with dealing with issues of constitutionality, is dominated by political party loyalists and not independent of the ruling Cambodian People’s Party, he said.

Many of the more high-sounding provisions in the Constitution, including protections of basic individual rights, could only be exercised within the scope of subsequent laws, many of which proved restrictive, Sam Rainsy said.

“The Constitution was written in such a way as the government and the ruling party can interpret it and water it down,” he said.

Papering over the cracks
Son Soubert, who sits on the nine-member Constitutional Council, said a bigger obstacle is the fact that the signatures of either the King, Prime Minister Hun Sen, National Assembly President Heng Samrin or one-tenth of the National Assembly is required in order to assess the constitutionality of legislation.

He said that whole institutions contained in the Constitution – including the National Congress, a public forum based on a similar body that existed under Prince Norodom Sihanouk in the 1950s and 1960s, and a Supreme Council of Defence headed by the King – have yet to take shape under the CPP’s rule.

The lack of the defence body in particular, he said, is a significant curb on the King’s constitutional powers.

Son Soubert, whose father Son Sann headed the Constituent Assembly that drafted the document in 1992-93, said the system of communist party patronage that dominated the government in the 1980s was merely papered over by the post-1993 constitutional order.

“For me, there are a lot of unfulfilled expectations,” Son Soubert said.

“The political will and the spirit of the Constitution has been betrayed.”

Son Soubert said the Constitution had generated high hopes in the early 1990s, but the UNTAC mission failed to facilitate a successful transition to a solid constitutional regime.

“It’s a missed opportunity, and it will be very difficult to come back,” he said. “With new generations, there may be an evolution of mind and spirit, but I still have my doubts about that.”

Glass half-full
Government officials, however, said the 1993 Constitution has led to significant gains. Cheam Yeap, a senior CPP lawmaker, said Tuesday that he was proud of what the government has achieved since its passing.

He said the Constitution gives a firm basis to government efforts to introduce new democratic reforms, reduce poverty and improve the human rights situation in the Kingdom.

“We have taken the Constitution as the basic law that we implement in Cambodian society,” he said, adding that 354 laws have been passed since the first government mandate, with more to come.

Although the CPP now has the two-thirds majority required to amend the Constitution at will, Cheam Yeap said the action was avoided and has only been taken six times to break serious “deadlocks”.

Despite lapses in implementation, others said the presence of a good written Constitution contained the seeds of future democratic progress.
Ou Virak, president of the Cambodian Centre for Human Rights, said the document – drafted largely by foreigners – has never been fully understood by those in power, but the existence of sound principles is a benefit for human rights activists.

“It’s always good to start with the right principle … and then from there, you push for enforcement,” he said, adding that if civil society activists thought more strategically, the Constitution could be a powerful tool.

“I think Cambodia is sitting on a great potential. Why we are not moving forward very rapidly – that’s another question.”