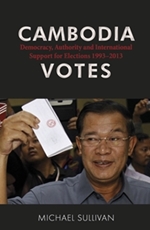 Michael Sullivan has written an exceptional chronicle of Cambodia’s modern electoral history, one that will serve as a reference for future scholars of Cambodia who may wish to study what democracy looked like, despite all its limitations, when it still existed in the country. (Full disclosure: I am a Trustee of the Center for Khmer Studies in Siem Reap where Michael Sullivan served as an Executive Director several years prior to my joining the Board.)

Systematically going from the UNTAC election of 1993 to the 2013 election, Sullivan details the inner workings of what Prime Minister Hun Sen and the ruling Cambodian People’s Party have done to ruthlessly amass power by hook and by crook. His Introduction has a good summary of the chapters that follow and provides a roadmap for what to expect. The chapters provide a lot of information—even I had trouble keeping-up with the details. (Thankfully, it was easy enough for this reader to remind myself of the events and to see them chronicled so richly and reconciled with my own understanding of the situation when they unfolded.)

From the very beginning, Sullivan makes clear that he ‘seeks to understand and explain the impact the 1993 UNTACelections had on the subsequent development of electoral politics in Cambodia up to and including polls in 2013’ (p. 2). He argues that ‘Beginning with UNTAC in 1993, the book argues that internationally supported elections have been the central site in a struggle between opposing political and civil forces for access to and control of the Cambodian state’ (p. 2),

There were two reasons for this. ‘Firstly, the Cambodian experience is unique in the fields of political transitions and electoral studies. International involvement and control of the transitional elections process was unparalleled in the early 1990s. Continued international technical and financial assistance for electoral development and engagement after UNTACis a key variable in understanding the ensuing struggle for control over the processes and outcomes of elections. Furthermore, new social and political forces that emerged from the UNTAC operation became significant players in the evolution of electoral politics’ (p. 2).

Secondly, ‘the Cambodian experience provides new insights into the inconsistencies and contradictions inherent in international support for multi-party democratic elections in conflict prone states. At the same time, the Cambodia case demonstrates that elections do hold out possibilities for meaningful social and political change despite manipulation and constraints placed upon them by authoritarian tendencies within the state apparatus.’ (p. 2)

The UNTAC period turns out to be a defining moment for Cambodian elections that goes well beyond 1992–1993, and would continue to impact Cambodia for a quarter century. ‘The question remained,’ ponders Sullivan, ‘what was the best way to handle UNTAC and the opposition parties?’ (p. 42). He posits that the biggest challenge to the CPP was the opening of new sources of information; what we might today in the age of Trump call “alternative facts”, instead of state propaganda. That information warfare continues to this day with a final assault on the Cambodia Daily, culminating in its closure on September 4, 2017, from a bogus $ 6.3 million tax bill, the banishment of Radio Free Asia and the National Democratic Institute. If one considers the CPP game plan, it has been and continues to be the elimination of all voices contrary to its own.

This brings us to the bigger questions raised by Cambodia Votes. What do elections mean when they are neither free nor fair? Do they still serve a purpose? Sullivan argues that they do insofar ‘as [they provide] windows to a broader understanding of social and political change’ (p. 5). And how should one characterize Cambodian democracy? Sothie Keo has argued that, following the recent assault on the opposition party and the media, “Democracy in Cambodia did not die—It has yet to exist” (The Diplomat, September 17, 2017). It’s a bit like saying the glass is half full versus half empty, but sometimes the debate can feel more about semantics than ideas. In Sullivan’s case, he argues that ‘Cambodia practices “electoral authoritarianism” ’ which ‘play the game of multi-party elections’ but ‘violate the liberal-democratic principles of freedom and fairness so profoundly and systematically as to render them instruments of authoritarian rule rather than ‘instruments of democracy.’ In sum, he finds them ‘broadly inclusive’ but ‘minimally competitive’ (p. 8.).

While Cambodia Votes came out before the Commune Elections of 2017, which continued to show the inroads of the opposition Cambodia National Rescue Party into CPP territory, the landscape has since changed 180 degrees. As of this writing, the CNRP has been dissolved by order of the court (an extension, in fact, of the executive), on a complaint made by none other than Funcinpec (no doubt at the behest of the CPP). CNRP’s seats were given as spoils to Funcinpec and a few smaller parties that earned one tenth of CNRP’s votes. Strangely, it smacks of 1997, when it was Prince Ranariddh who lost his Prime Ministership to his Foreign Minister, Ung Huot, a man chosen by Hun Sen because he was more pliable. Now it is Ranariddh and Funcinpec who assume CNRP’s seats. Michael Sullivan’s Cambodia Votes comes at no better time to remind us of Mark Twain’s aphorism: “History does not repeat itself, but it often rhymes”.

You can purchase the book by clicking this link: