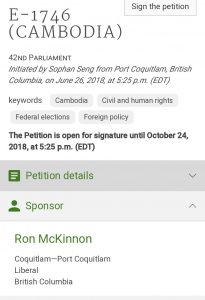 We, the undersigned, citizens and permanent residents of Canada,, call upon the Government of Canada to: 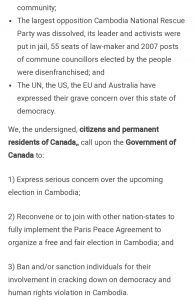 1) Express serious concern over the upcoming election in Cambodia;
2) Reconvene or to join with other nation-states to fully implement the Paris Peace Agreement to organize a free and fair election in Cambodia; and
3) Ban and/or sanction individuals for their involvement in cracking down on democracy and human rights violation in Cambodia.
Click this link to sign this online petition.