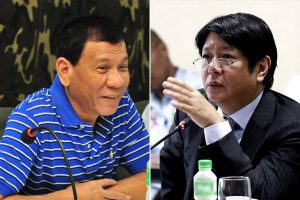 Duterte obtained 33 percent voter preference, according to the Pulse Asia poll taken from April 19 to 24, down from 34 percent in its April 12-17 survey. File photo

As of noon yesterday, 406,780 had voted during the 30-day overseas voting, representing   29.56 percent, the DFA Overseas Voting Secretariat said.

In Asia-Pacific, 158,250 Filipinos had voted, 72,021 in the Americas and 42,494 Filipinos in Europe, according to the DFA Overseas Voting Secretariat.

Figures from the Commission on Elections   showed a total of 1,376,067 overseas Filipinos registered worldwide for the 2016 polls.

Garry Martines of Migrante urged yesterday Filipinos abroad to stay vigilant and ensure that their votes will be counted.

He said close to 400,000 Filipinos were able to cast their votes for the national elections.

A total of 376,586 overseas voters participated in overseas absentee voting (OAV) or a rise of 285 percent compared to the 2013 polls, he said, citing data from the DFA.

“The number of OAV voters is still expected to rise as Filipinos continue to troop to polling centers until the last day of voting yesterday,” he said.

Martinez said the high turnout of overseas voters is testament to how Filipinos, wherever they are in the world, thirst for genuine change.

“They want accountability. They want new leaders who will be nurturing to OFWs and migrant workers and their families back home.”

Martinez said Filipino communities worldwide have persevered and overcame the various setbacks and obstacles that would have otherwise discouraged them to vote.

“Our OFWs have remained vigilant,” he said. “We have once again proven how resilient and significant our OFWs are. We have disproved all claims that there had been a growing apathy among our OAVs.”