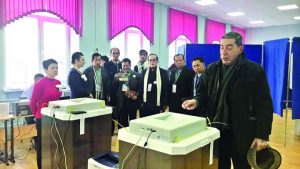 Cambodian election observers declared Russia’s presidential elections to be “free, fair and transparent” in a statement released on Monday.

Officials from the Senate, National Assembly and National Election Committee travelled to Moscow on Sunday and visited a number of precinct-level election commissions on election day.

In its statement, the delegation concluded the election was “in accordance with democratic principles”.

The results of Russia’s election, won in a landslide by President Vladimir Putin, were largely seen as a foregone conclusion. One of the country’s most prominent opposition activists was barred from the ballot and reports of people being ordered to vote by their employers were widespread.

In an email, Astrid Noren-Nilsson, an expert on Cambodian politics at Lund University, said the visit was part of Cambodia’s pivot to Russia and China.

While China offers military and economic support, Russia offers “moral support and legitimacy”, including election monitors, which Russia pledged to send in November, she said.